Boxing gloves come in varied weights, shapes and sizes. Choosing the right gloves can drastically improve the performance of players inside the ring. We can never overestimate the importance of finding the right sized and right weighted professional boxing gloves. If you are new to the boxing landscape, you should make it your priority. However, it is important to note that the definition of the right size and weight of boxing gloves varies depending on the purpose it will be used for. 10 oz gloves can be considered a good fit for someone in case of pad training, but the same gloves might not be the best choice for sparring. Let’s dig deeper to learn more about choosing the right professional boxing gloves.

Boxing gloves categorization based on weight

There are different weights assigned to professional boxing gloves based on the level of padding it contains. Some of the most popular ones are listed below.

The 8 oz gloves are the lightest on the list of professional boxing gloves. It also offers very limited protection during fights. They are primarily used by lightweight fighters who are new in the game. One of the competitive benefits offered by these light-weighted boxing gloves is that it makes your hand action quicker and doesn’t weigh the player down much during fights.

The 10 oz gloves are comparatively heavier than the 8 oz ones, but still offer little protection because of limited padding. Most boxing players use these gloves to add speed during their heavy bag training sessions. Players need to make a trade-off between their protection and speed while using the same.

The 12 oz gloves are among the most commonly used professional boxing gloves inside the ring. Boxers of varied sizes use them for hitting on pads and bags. It offers an optimal balance between speed, stability and overall protection. You don’t have to compromise on your protection for the speed. They significantly reduce the risk of getting injured on your wrists and knuckles with the extra padding. However, the speed offered by these gloves will be a little slower than those offered by the 10 oz and 8 oz gloves.

The 14 oz boxing gloves are among the standard gloves that are used by professional boxers. It is slightly heavier than the 12 oz gloves but offers extra protection and stability. These gloves are also the most commonly used ones during sparring for lightweight and women fighters. It is best for sparring for those who have relatively low power punches. The 14 oz gloves also offer a better feel since the risk of injuring is very minimal and players have the flexibility to practice their punches without any worries.

The most commonly used boxing glove during sparring by professional boxers is the 16 oz glove. They are fully equipped to provide the required protection during sparring or professional boxing contests. The extra padded layers ensure players don’t damage their wrists or knuckles while practising their punches. It might feel a little heavy for lightweight fighters and for those who are new to the game. However, it ensures maximum safety inside the ring.

Choosing the Right Gloves Based on Purpose

Boxing gloves can be used for different activities related to boxing. Let’s take a quick look at different boxing-related activities that players commonly indulge in and find out which is the right weight category.

For heavy bag workouts, you should always refrain from using right weighted professional gloves as it increases the probability of damaging your wrists and knuckles. Excessively heavy boxing gloves make it hard to feel your contact with the object and also weigh you down. Most boxing players prefer to use the 10 oz or 12 oz gloves for heavy bag training. You must never hit a heavy bag with your bare hands, as it can cause brutal injuries.

The boxing or MMA training equipmentrequired during heavy bag and pad training is similar to a great extent. Similar to heavy bag training, pad training also requires you to use well-padded gloves that shouldn’t be too heavy but also not very light. Your gloves shouldn’t weigh you down during your practice and should also not compromise on the safety of your hands.

Sparring is intense and there is a lot at stake, so it is advised to go for the heavier boxing gloves that have extra layers of padding. The extra padding certainly adds to the weight, but it also provides unparalleled protection. Boxers usually opt for higher weighted gloves for sparring, as it requires adding an extra layer of protection to reduce injury. Most players have two sets of boxing gloves, one is used for heavy bag and pad training, the other is used during sparring. The 14 oz and 16 oz gloves are the most commonly used ones for sparring. 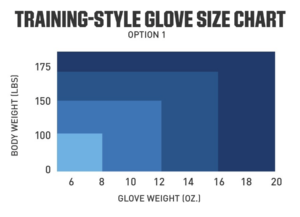 Boxing gloves based on the player’s weight

The weight of the gloves used for boxing also varies depending on the weight of the players. For men weighing 100 pounds or lesser, the 8 oz gloves are preferable for heavy bag and pad training. However, for sparring, they can choose anything between 12 oz to 16 oz. Men weighing over 100 pounds but less than 150 pounds can opt for the 10 oz boxing gloves during pad and heavy bag training. Sparring for this weight category requires 16 oz boxing gloves. Men who weigh over 150 pounds should always use the 12 oz glove for most training. During sparring, they should have at least 16 oz on their fists. For those who weigh over 200 pounds and come under the Super Heavyweight category, 18 oz or 20 oz gloves should be used for sparring.

This was a quick guide to help you find the right weighted professional gloves based on your weight, purpose and experience.